A Tour to Democratize Access: Unleashing the Wealth Revolution in the Middle East

Democratizing the creation of wealth is not an easy task. For that reason, Rosie Ríos, the  43rd Treasurer of the United States, and I embarked on a roadshow in the Middle East with the aim of introducing our disruptive vision on the next frontier of investments and the new digital market and unveiling Unicoin, a next-generation of intelligent cryptocurrency backed by assets. The tour was filled with meetings, conferences, and special events during which we announced that Rosie has joined our Board of Directors.

The tour began in the Kingdom of Saudi Arabia at the 18th Ritossa Global Family Office Investment Summit, one of the most influential investment conferences in the world, bringing together world-class leaders and investors. His Royal Highness Prince Abdulaziz bin Faisal bin Abdulmajeed Al Saud was the guest of honor at the event hosted by Sir Anthony Ritossa, Chairman of the Ritossa Family Office.

Unicoin’s world debut in the Middle East was extraordinary. We had the opportunity to meet with world leaders, legislators, and investors from all continents who expressed their solidarity with our mission to revolutionize wealth creation and commitment to investing in the next generation of cryptocurrencies.

Business is a contact sport, and we had the great pleasure of meeting allies that bring new energy to our ecosystem.

Gender inclusion was a key theme in our agenda, and it was particularly important given that Unicorn Hunters was represented by its female leaders. As champions of inclusion, we shared our vision for a world in which female entrepreneurs, business leaders, and investors have an opportunity to create wealth and I am pleased to say that we have extended our reach here.

Our next stop was the World Blockchain Conference in Dubai, an initiative promoted by the leaders, experts, and proponents of the blockchain ecosystem. This time, the speech was given by Rosie, who focused on the future of money and the democratization of wealth creation.

We had the pleasure of ending the tour on a high note, in a panel discussion at the World Expo 2020 Dubai, the most important exhibition in the world, organized in the USA Pavilion. We give our thanks to Bob Clark, United States Commissioner General, for supporting our initiative and helping us make this event happen.

It was a pleasure partnering with Rosie Rios, Sir Anthony Ritossa, Bob Clark, and Juan Cavalier on this launch, which is the beginning of a wealth creation revolution that will open up the benefits of blockchain technology and cryptocurrencies to the masses, while helping entrepreneurs bring great ideas to life.

The bottom line: the future of money and the revolution in wealth creation are inevitable thanks to decentralized financial markets and blockchain technology. Do you agree? What’s the future of our economy? 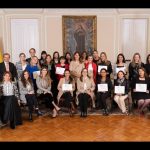 Women Who Transform: The Initiative that Revolutionized Female Empowerment in ColombiaBlog 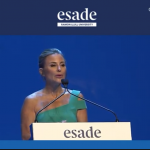