SAN FRANCISCO , May 17, 2022 /PRNewswire/ — Unicoin, the next-generation, dividend-paying cryptocurrency designed to bring stability to the highly volatile cryptocurrency market, announced today that Cris Carter, a former NFL football pro and Hall of Famer, will be the brand’s Global Ambassador. Cris will help to communicate the benefits of the equity-backed cryptocurrency to the global audience.

“The current meltdown of Bitcoin provides Unicoin with an opportunity to become a leading cryptocurrency and we are thrilled to welcome Cris to our team,” said Alex Konanykhin, CEO of Unicoin. “Cris is a sports legend, savvy entrepreneur, and experienced broadcaster whose voice will be instrumental to telling our story and disrupting the crypto market.”

“Cryptocurrency has proven that it is here to stay and that it will be an important part of our future. Unicoin is doing something incredibly unique and as a crypto enthusiast, I am excited to join the Unicoin team,” said Cris Carter.

In the role of Global Ambassador Cris will be the voice of Unicoin, a next-generation cryptocurrency that will pay dividends and will be backed by equity in emerging growth companies. Unicoin was designed to alleviate high volatility, the major problem of traditional tokens, and to offer its holders protection from inflation. Additionally, it is the only cryptocurrency that was created to fund high-growth startups through its Global Innovation Fund, which will include equity positions in the numerous emerging growth companies that are part of the Unicorn Hunters platform.

Unicoin is the official coin of the Unicorn Hunters show, described by Forbes magazine as “the most iconic business series of recent times,” and it has received significant recognition from several renowned personalities, including Steve Wozniak, co-founder of Apple and Rosie Rios, former Treasurer of the United States, who joined Unicoin’s Board of Directors early this year.

“Unicoin is really opening up the world of startup investment to the masses and isn’t just based on words and talks, but instead on the outcome of investments,” said Wozniak in an interview with Insider.com.

Unicoins are now available for purchase at Unicoin.com at 10 cents per coin, its lowest public pricing. U.S. and Canadian residents must be “accredited investors,” in order to purchase Unicoins. Unicoin is expected to be tokenized and listed on major crypto exchanges in early 2023 after developing high brand value, global awareness of its benefits, and a strong equity portfolio.

About Unicorn Hunters and Unicoin
Unicorn Hunters (a DBA name of TransparentBusiness, Inc.) is a pioneering business show that democratizes access to funding, giving founders the possibility to raise expansion capital from millions of viewers around the world, and gives people the opportunity to invest in pre-IPO opportunities alongside business luminaries, like Steve Wozniak, the co-founder of Apple.

Unicoin is a next-generation coin from the producers of Unicorn Hunters that solves for volatility, the greatest challenge of traditional crypto, by offering inherent value instead of perceived value through equity positions in the high-growth companies that are part of the Unicorn Hunters platform. 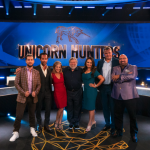 Unicorn Hunters: Our Show Celebrates One Year Democratizing the World of Investments!Blog